The heat goes on … Temperatures hit 33 in the shade today but there was little to no shade on the road from Baena; The route loosely followed the course of the Guadajoz river which has tantalisingly cool banks with tall trees, but I was walking under cloudless skies on a hard road surface that reflected the heat back at me. I felt tired and irritable, having spent most of the night on the stone doorstep of the albergue – There was no bathroom in the dormitory annex. My roommates (a group of four older men) anticipated that one of their party might need to leave the building to answer a call of nature during the night. They had only one key between them, so they left it in the lock on the inside of the door. What they didn’t anticipate was that I might exit the building at 2:30am and find myself prevented from using my key to re-enter. I rang the bell but was unable to rouse anyone, so I waited there until the first pilgrim left at 7:00.
Following this disruption to my routine, I didn’t get out of town much before 9:00. A group of hunters was out with dogs and guns in the olive groves near Baena, and the sun was climbing and starting to show its strength. I put some knots into the corners of the pennant that the Camino Association in Almeria gave me and wore it on my head, like the archetypal Dad from a Donald McGill postcard, since my lovely Forrester cap has gone missing. (I think I had when I checked into the albergue on Baena but it wasn’t with my things this morning).
Rio del Castro didn’t look too promising from a distance, but it turns out that the centre of town is an attractive maze of white-painted streets. There was a Córdoba tourism festival in the town centre, with stalls selling all kinds of local produce. If I’d known about it, I needn’t have bought snacks for tomorrow on Saturday. I enjoyed mingling with the crowds who were enjoying food and drinks in the sunshine. I looked for a stall selling hats, and found one with leather cowboy hats and straw boaters with black bands – but nothing in my price range or style, so I’ll be following the best traditions of the British seaside holiday with my knotted hanky again tomorrow.
One man spotted me and offered to guide me to the municipal albergue, so I had to explain to him that I wouldn’t be staying at an albergue this evening. No way! Instead I have checked into a private room with en suite bathroom in a small hotel above a nursery school on Calle del Álamo; an easy address to remember. With nursery rhymes as my background music, I fell into a deep sleep. I’ll pop down to the restaurant which is managed by the owners of this hotel for a bite to eat now. After dinner, I hope I’ll enjoy a restful night. 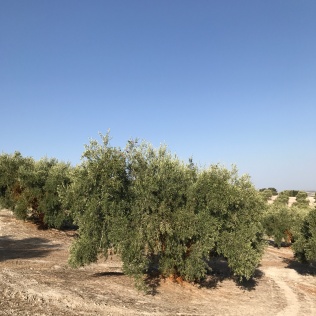 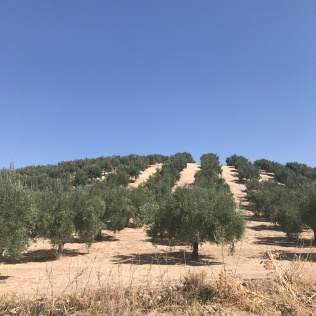 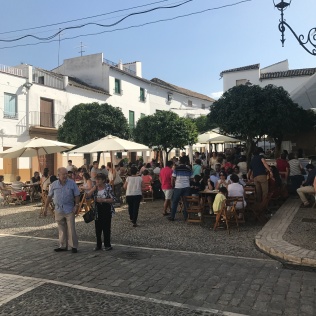