Feet of lead.
I hardly had any time to look around Lalin before leaving. It has a 60s or 70s modernist look to it – a style that I’ve since seen repeated in Silleda and Bandeira, so I assume that they were all shaped by the same town planner – perhaps in some Galician regional government office. I’d love to know more about the politics of housing at that time.
There’s a museum to a son of the city, Ramon Maria Aller Ulloa, who made a career of astronomy, mathematics, and the priesthood. An “interesting” combination. His statue stands outside in an overcoat and scarf, which is very sensible in this cold snap. I also found a lovely fruit and veg shop in the covered arcade by the albergue. The greengrocer identified the tall, leafy, vegetable, that I’ve seen in so many gardens, for me. It’s “grelo,” a common ingredient in Caldo Gallego. Finally, in the town centre, I came across a bronze statue of a pig, which felt like a good omen for my Camino, since my home town in Wiltshire also has bronze pigs.

Note (added on 22/Aug/2018)
Later on my journey, I learnt that grelos are “turnip greens,” which taste good in caldo. The large vegetables that I was trying to identify are known by various names, including “bersa” (which might be related to the word “brassica”) and “col” (which, I guess, is related to the German word “kohl” and English “cauli.”  Basically, they’re cruciferous vegetables, like cabbage and broccoli. The Galicians pick the leaves from the plants when they are ready to eat, and leave the plant to grow more leaves through the season.

I had feet of lead today. For whatever reason, I made very slow progress in the morning. Perhaps the distance and stress of yesterday’s walk exhausted me. Perhaps I stayed up too late to get my clothes washed and dried. Or perhaps I was frustrated by the lack of signage on the pretty parkland walk out of Lalin. Had there been only one path, it might not have mattered, but I had to keep asking people which forks to take and which bridges to cross. This lack of signage persists in the industrial estate after the park. Fortunately, signage improved when the path merged with the Camino Sanabres outside the albergue in A Laxe. From that point I felt well guided by the yellow arrows.
By the time I stopped at a cafe in A Laxe for a sandwich and a change of boots, I knew that I wouldn’t make it to Puente Ulla to join Uwe for the last leg. I exchanged messages with Uwe who told me not to worry and to make sure that I savoured the last days of this Camino. He is right. It’s the same advice that Veronica gave me at the start; Keep looking around and stay open to the things that you’re seeing (I have a more exact quote in the diary for Day Zero). What I saw today was good – Woodland paths. A C10th bridge. A horse that escaped from its field, running with dogs (or from them?) and finding a patch of grass outside the stone wall of the farm. Some pretty villages – especially Trasfontao, which has an albergue. The beautiful church in the modern, and surprisingly large, town of Silleda. The “in black against violence,” (“En negro contra as violencia”) signs in the windows of businesses and local government offices that made me wonder what acts of violence or crime had disturbed this apparently peaceful area.
When I reached Bandeira at 4pm, I wanted to dig deep and find reserves of strength to carry me to the next town, Dornelas, from which I could make a 30km hike to Santiago tomorrow. But like an Englishman at Wimbledon, I folded. I had neither the power in my legs, nor the desire in my heart to arrive in a small village as the sun was setting. I checked into the Victoriana Hotel and enjoyed a nap and a long bath.
The hotel is impersonal and the heating is weak, but it seemed like a better option than the albergue, which is housed in temporary structures with separate modules for the bathrooms and dormitories. One online review pointed out that the design requires pilgrims to step outside to go to the bathroom at night in winter … brrr
The town of Bandeira has several restaurants and bars. I stopped in a couple to find a suitable spot to eat. The Vinoteca was particularly nice, with a log fire and a menu of dishes that I would have loved to try; different preparations of mussels, and vegetables. But the owner (or a family member?) was playing with her small son who was running around and crying for attention. She seemed harassed when I ordered a glass of wine and the wifi code. After one glass, I returned to the hotel for a typical “menu de peregrino.”
I am now 35km from Santiago. It’s walkable in a day – I’ve walked further. But I won’t. Not the way I’m walking at the moment. Instead, I’ll break it into two sections – 13km to Puente Ulla and 21km from there to Santiago. I’ll celebrate with Uwe on Saturday evening. 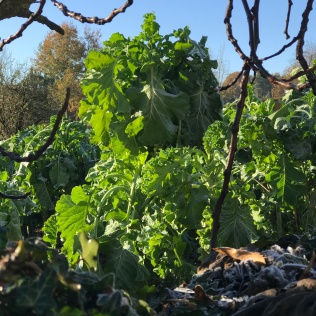 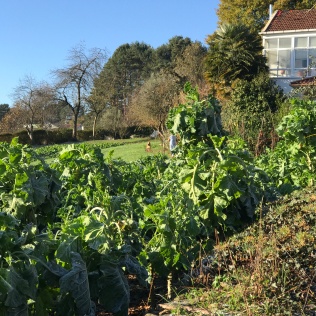 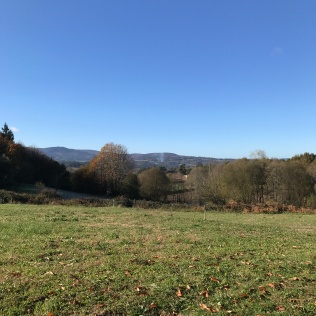 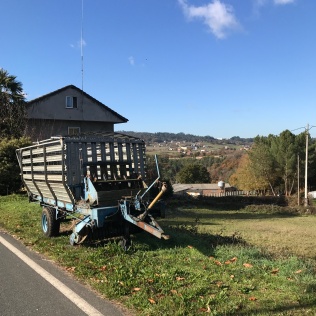 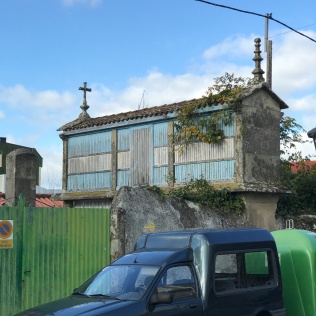 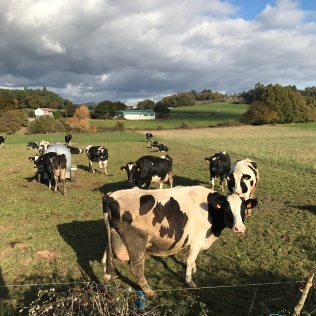 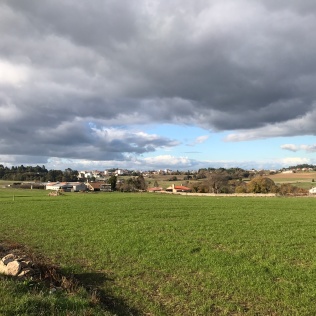