A relatively flat walk, amid pleasant woodlands, but always within earshot of the busy N432 road.
Before leaving my room this morning, I took a photograph of one of the pictures on the wall in my room, which depicts the ideal pilgrim and his gear. I walked out of town shortly before 8:00am, past the large military base, and onto a footpath.
The route took me past more holm oak woods, and similar landscapes to yesterday, but without the dramatic views from above.
The path took me across a couple of small streams with stepping stones, past a disused station from the old railway that served Cerro Muriano in its copper mining days, and across some more railway tracks through which trees are now growing. At times I found myself walking on the old road, which is breaking up and has plants and moss growing on it. From Mark Brown’s blog, I have learnt that this phenomenon of nature reclaiming man-made space is known as “Fourth Nature,” in Germany:
http://www.citinature.org/…/nature-of-the-fourth-kind-berlin
I looked across at the spiffy new N432, which was close by and wondered when it too would join the Fourth Nature of the old road and railway next to it. And, eventually, what evidence will remain that we were here at all? Just the odd concentrations of radioactive elements in places where we produced electricity and two golden phonograph discs on the Voyager spacecraft?
About half way into the walk, at El Vacar, I stopped for a coffee and discovered perhaps my favourite shop of the trip so far – Bar/cafe Laura appears to be doing its best to serve its community’s every need. While the grocery stores in Cerro Muriano offered a rather limited range of branded products wrapped in plastic, Laura has a display counter with a generous range of sausages, hams, and cheeses, a separate counter for fresh fruit and vegetables, several shelves of freshly baked bread, an array of cooking pots and pans in every size – right up to huge steel cauldrons that an army field kitchen might use. There’s a rack of hunting apparel, and a display case of sports knives, gardening equipment, tools … you name it. The owner manages everything from preparing food and serving drinks to slicing and weighing 100g of iberico pork for my afternoon snack. And after I paid for my purchase, she offered to stamp my pilgrim’s passport for me. I’m thrilled with the stamp – It’s the kind of shop in which I could happily spend all afternoon buying fork handles.
While I was soaking up the atmosphere in the store, another pilgrim walked in – Michel from France. He has walked two Caminos before and is going as far as Merida this time. Why are so many French pilgrims called Michel?
Michel and I walked the rest of the way to Villaharta together. The conversation was good and the scenery not dissimilar to yesterday’s so I didn’t take many photographs.
We arrived before 2pm in Villaharta and found the Mirasierra bar, whose rooms we are staying in tonight. The owner came in from working on his olive trees and showed us the apartment with a large terrace where our clothes are drying now.
Tomorrow will be a challenging day. The distance from here to Alcaracejos is 35km (or 38km if you believe Michael’s French guidebook, which seems more thoroughly researched than the guides that I have been using). There are no settlements, but there is one source of drinking water about half way into the walk. I am determined to do it – The temperature should be bearable (26 degrees today, for example) and I think my feet can take it. The “dogs” howl when I take my first steps but they seem to settle down after a few hundred meters.
Michel is making his mind up now. The alternative for those who don’t want to walk 35km is to walk half, be picked up by the owner of the bar, and then be driven back to the same location the next day to walk the second half. One could also take a bus and skip the entire stage – but that would be a shame since the scenery is supposed to be beautifully untamed – First Nature. 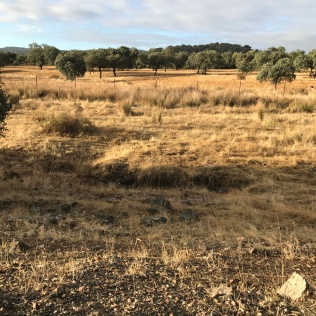 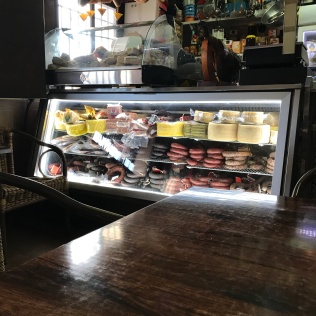 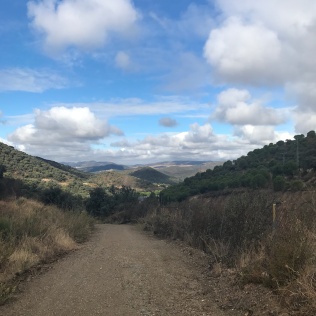 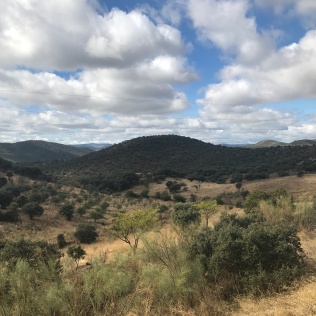